In addition to normal patrol duties, some troopers can request assignment to special details. The New York State Police has several specialized details throughout the state.

NOTE: You must first become a sworn uniform trooper to request a specialized assignment, we do not have separate applications for these details.

The New York State Police Aviation Unit was formed in 1931 and consisted of only one fixed wing aircraft.  It was discontinued a few years later. In 1967 the unit was reformed, and again consisted of only one single-engine aircraft, a Cessna 172. That airplane is still in service today. In 1998, the NYS Department of Environmental Conservation’s flight department was merged into the State Police Aviation Unit. Today, the unit has over 40 pilots and 21 aircraft.  The diversity of the unit’s missions requires it to fly both helicopters and fixed wing airplanes.  The unit currently flies the following helicopters: Sikorsky S76D, Bell 407, Bell 430, and Bell UH-1 Huey.  Additionally, the unit flies the following airplanes: Beechcraft King Air 250, Cessna 206, Cessna 172, and Partnavia P68.

The New York State Police Aviation unit provides a variety of services throughout the state. 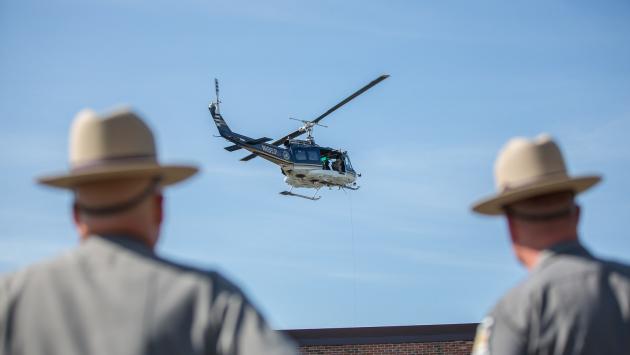 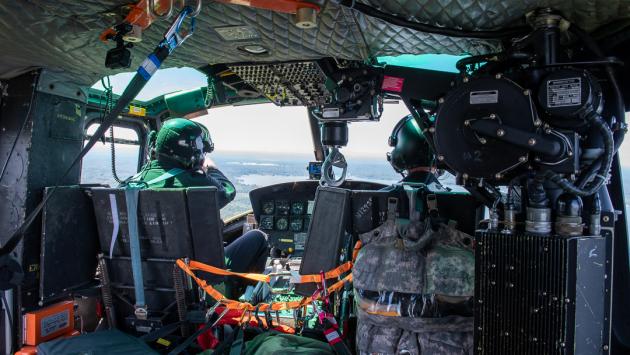 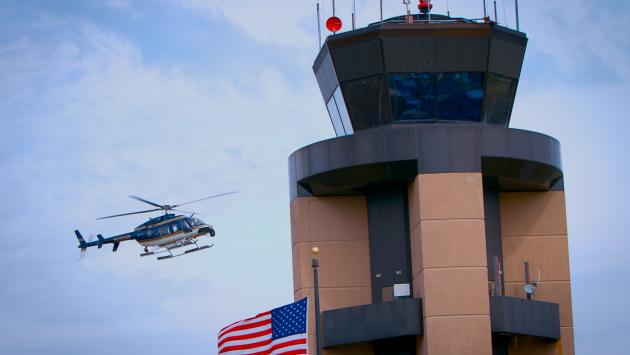 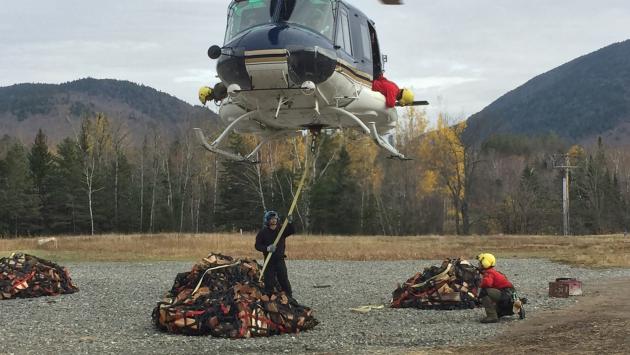 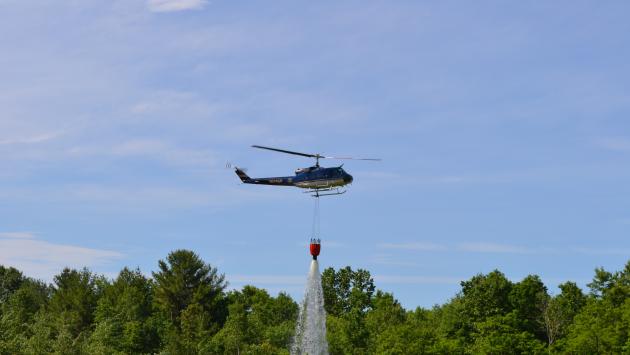 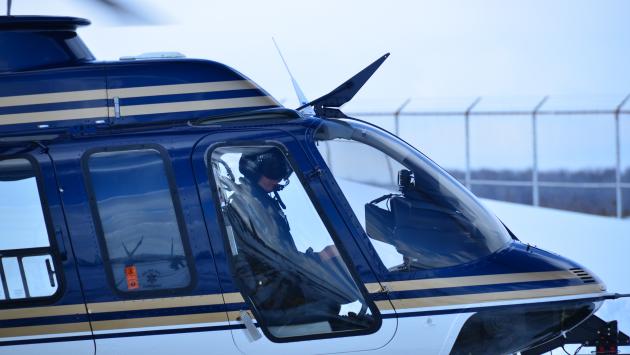 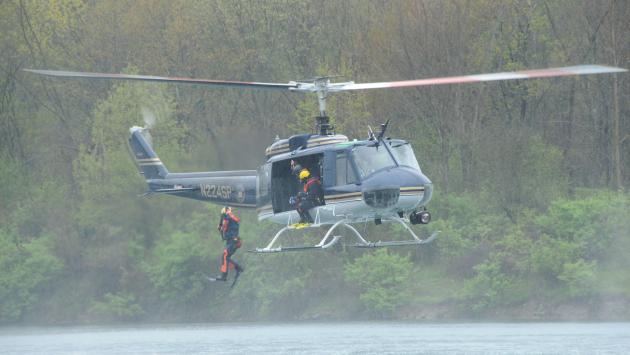 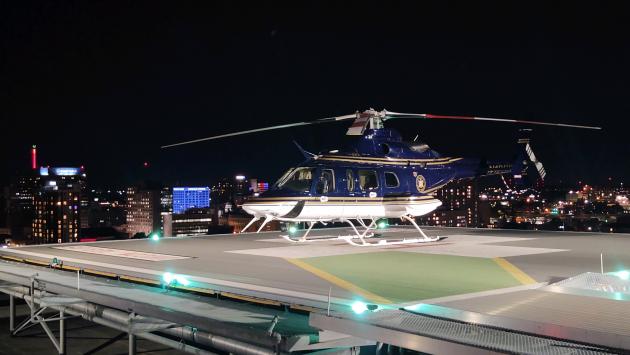 The Division's Mountain Bicycle Patrol program began in 1997, when Troop T began providing bike patrols along the New York State Canal Trail System. Each year, the State Canal Corporation has worked with municipalities across the state to open additional sections of trail, with the ultimate goal of having a trail system connecting the state from Albany to Buffalo. Troop D, with financial assistance from local businesses, has provided bike patrols in the Sylvan Beach area and the New York State Fairgrounds since 1997. The Executive Services Detail also began providing bicycle patrols at the Empire State Plaza complex in Albany.

Established in 1972, the NYSP Bomb Disposal Unit (BDU) is the second-largest squad of its kind in New York State, exceeded only by the New York City Police Department's Bomb Squad. The BDU is responsible for responding to calls for improvised explosive devices, recovered military ordnance, commercial explosives and fireworks throughout much of the upstate area.

The BDU maintains separate facilities in Albany, Newburgh, Watertown and Batavia. Each facility is equipped with mitigation equipment, such as disposal trailers, robots and hazardous materials (HAZMAT) suits. Each bomb technician carries critical first-responder equipment, including an X-ray device and bomb suits.

All BDU members are trained in the handling of hazardous materials, including chemical and biological agents and provide services to municipalities lacking their own HAZMAT teams. All bomb squad technicians maintain certification through the FBI Hazardous Devices School in Huntsville, Alabama.

The New York State Police Contaminated Crime Scene Emergency Response Team (CCSERT) was created to train and equip members to respond to terrorist actions involving chemical, biological, nuclear and explosive (CBRNE) material. Along with being prepared to respond to CBRNE incidents, the four regional CCSERT teams are regularly called upon by other law enforcement agencies for their expertise in responding to, and mitigating, various dangerous clandestine drug laboratories. These clan labs include, but are not limited to, methamphetamine, fentanyl, steroids and ecstasy (MDMA).

The New York State Police created the Division Canine Unit in 1975. The three canines were put into service as explosives detection canines in preparation for the 1980 Winter Olympic Games in Lake Placid, New York.

In 2000, the Canine Unit found a permanent home in Cooperstown, New York. Through the generosity of philanthropist Jane Forbes Clark and the Clark Foundation, the Canine Unit was provided with a state of the art training facility. The facility is a 10,000 square foot colonial style structure set on approximately 2,000 acres. The facility can accommodate 15 students and staff, and provides a variety of training applications. The facility serves as a command center for the Canine Unit being centrally located in the state, and is open to all police agencies.

During the 20-week training period, a new handler and a untrained canine are teamed together and undergo a strenuous program during which the teams are instructed in: basic obedience, agility, handler protection, either narcotics or explosives detection, tracking, building searches, veterinary first aid, and land navigation - map and compass course. The students are required to pass all aspects of training to receive certification. Upon completion of the Canine Handlers Basic School, the teams are sent out on patrol and receive re-certification bi-annually at the training facility.

New York State Police canines are named in honor of the men and women of the state police who have died in the line of duty.

The URT responds to an average of 240 calls annually and performs an average of 1,800 dives to recover victims, weapons, evidence, vehicles and aircraft from New York State waters. 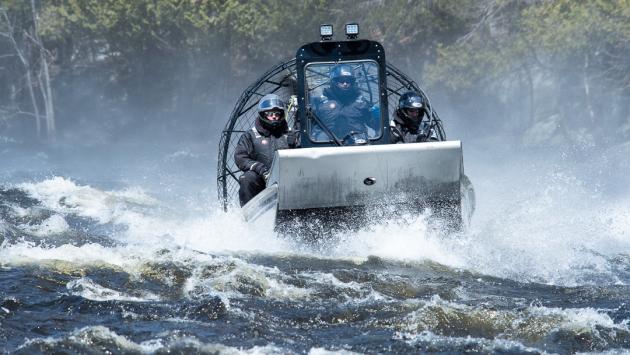 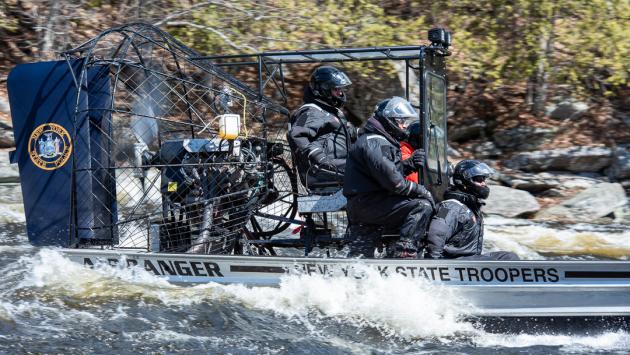 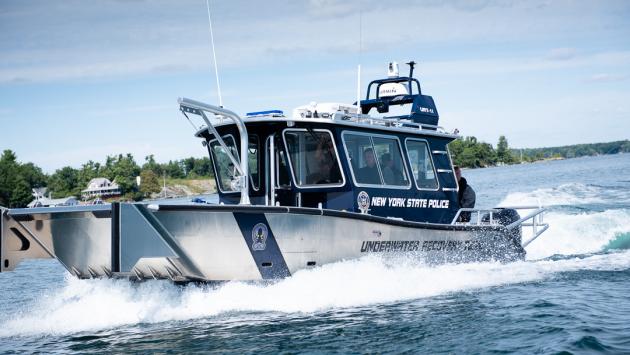 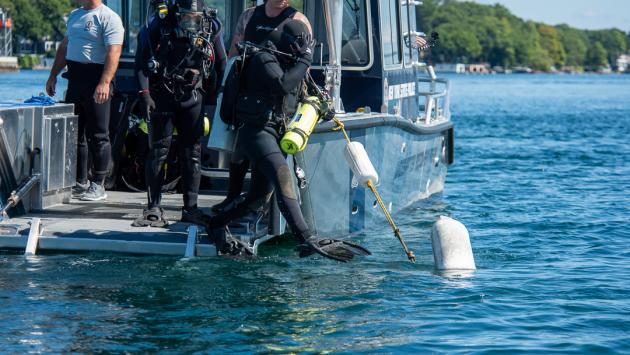 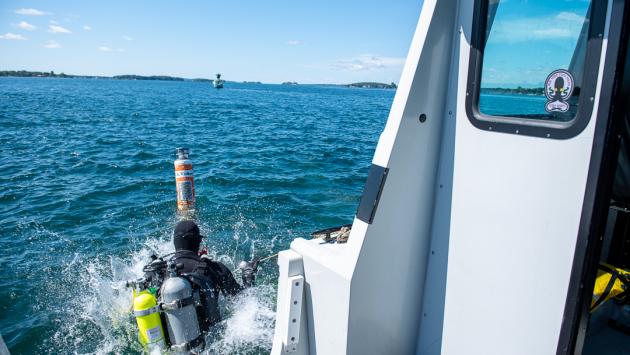 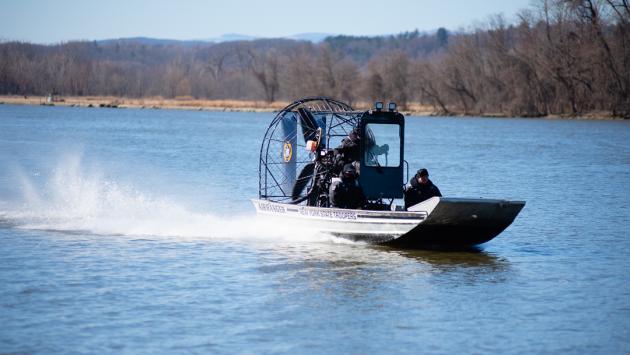 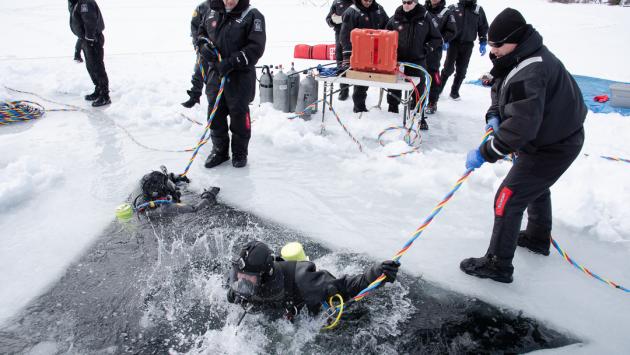 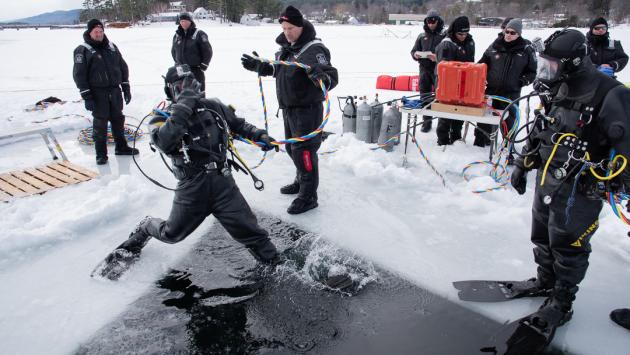 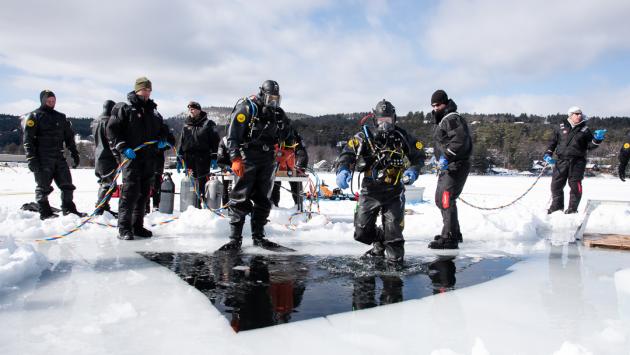 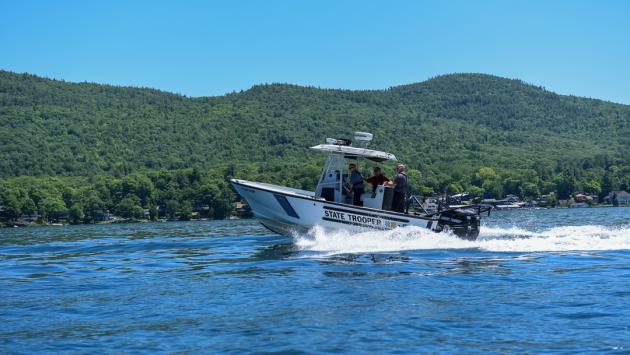 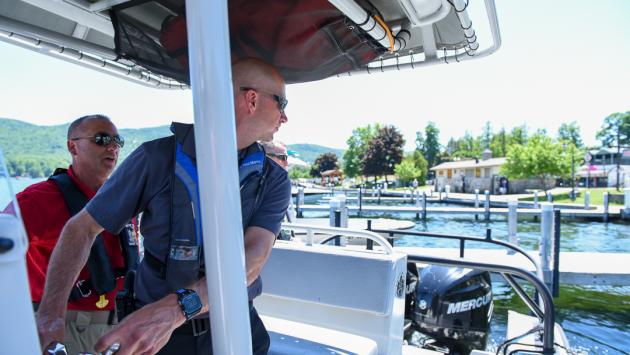 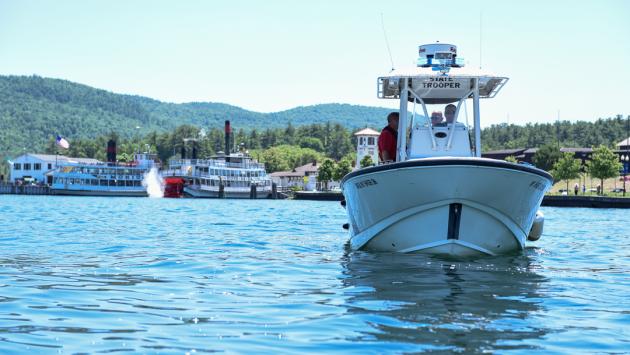 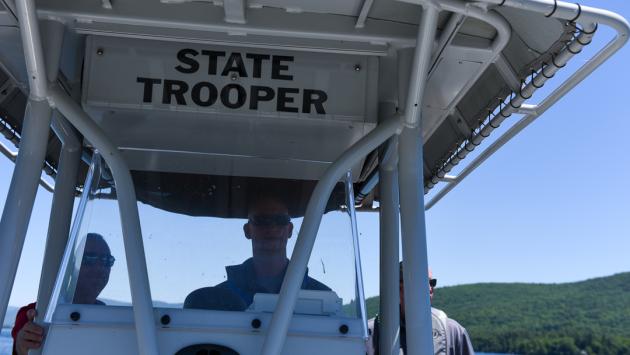 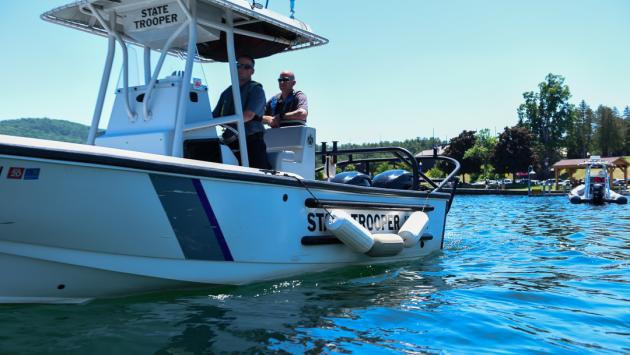 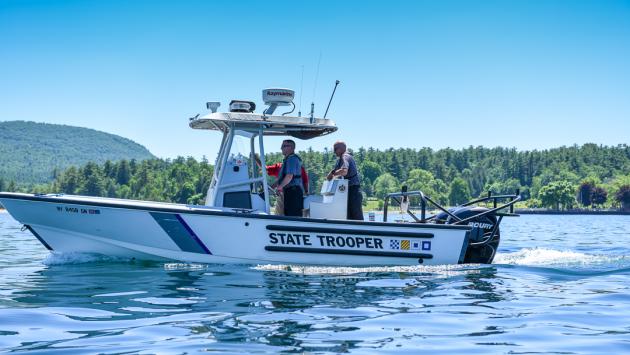 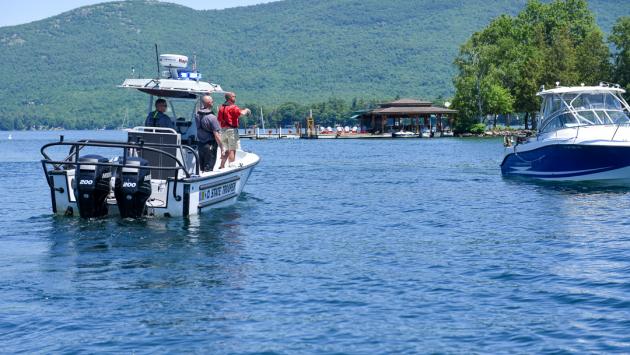 The New York State Police Motorcycle Unit is a multi-purpose unit trained to assist for any purpose except routine patrol. The unit, re-established in 1997 after a more than 30-year absence, have been used to escort visiting dignitaries, provide security at large events like the annual Ironman Competition in Lake Placid, and for policing large crowds or high traffic-volume areas. The motorcycles are capable of negotiating dense traffic, can quickly respond to emergencies and clear the way for emergency equipment in situations inaccessible by troop car.

The Radiological Interdiction Detection program was established to work with federal, state, and local agencies to detect and interdict illicit radioactive material that could potentially be used by terrorists in a dirty bomb or improvised nuclear device. Specially trained New York State Police members carry specialized equipment that can detect all forms of ionizing radiation.

New York State Police members assigned to the detail are certified to instruct the New York State Snowmobile Safety Program, and assist with the instruction of these courses across the state. Snowmobiles can also be used to assist Troopers during inclement weather.

New York State Police have utilized ATVs during searches for missing persons, criminal investigations, to transport personnel to remote crime scenes or search locations and for specialized enforcement efforts. Some NYSP ATVs are equipped with optional tracks which replace the wheels and can be used to get through heavy snow during inclement weather conditions to assist stranded motorists.

The New York State Police Special Operations Response Team (SORT) was created in 1980 to provide a tactical response element for the Winter Olympics in Lake Placid. There are currently five regional teams: Capital, North Central, South Central, South and West. The teams train and respond daily, providing their specialized services to communities and law enforcement agencies across the state.

Special Operations Response Team duties include, but are not limited to: 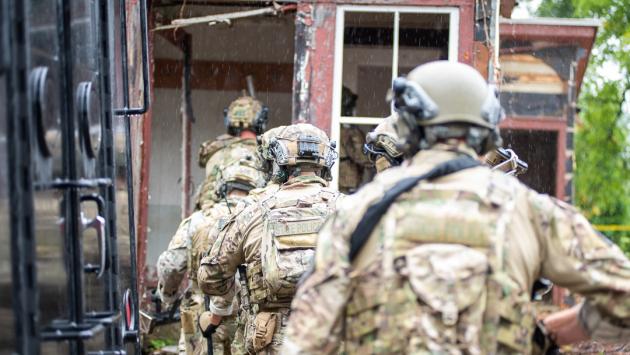 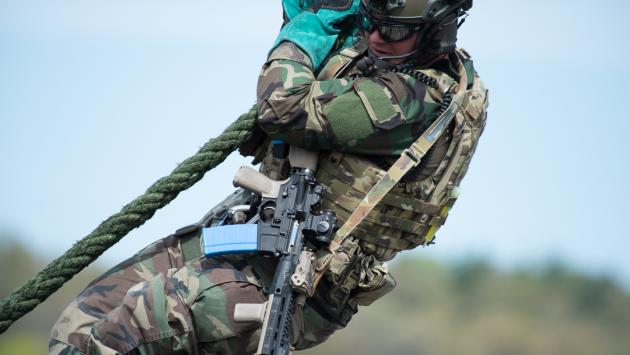 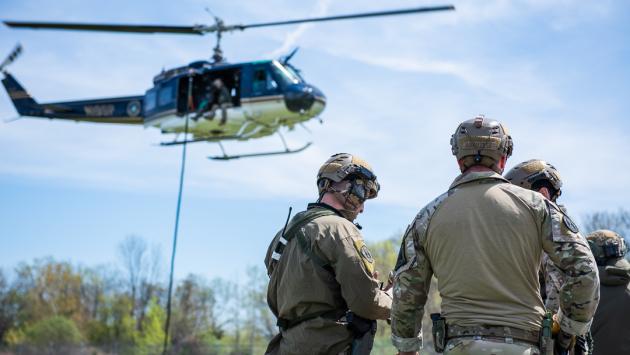 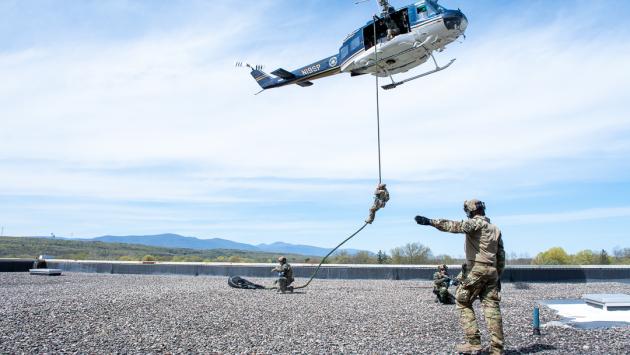 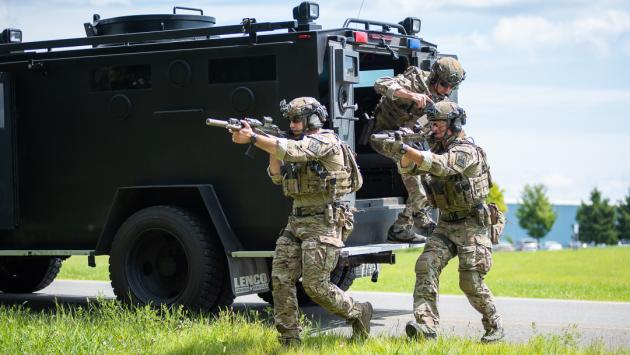 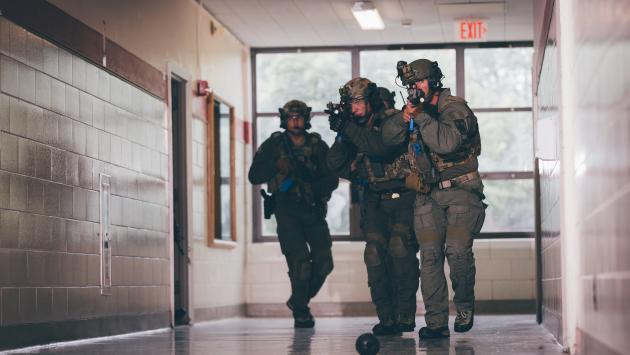 The UAS will be used to support law enforcement missions, including disaster response and traffic safety.

The Unmanned Aerial System can document and help reconstruct serious motor vehicle crashes in less time than with current methods, resulting in shorter road closures, lessening the impact on motorists. Investigators will also use the aerial drones to document and photograph crime scenes. The drones can also be used to search for missing or wanted individuals.

State Police members who operate the Unmanned Aerial System are FAA certified and undergo 32 hours of hands-on training with the systems.